Arrache toi un oeil! is a duo consisting of Emy Rojas and Gaspard Le Quiniou specializes in screen printing, graphic design and illustration. They both live and work all over Paris.

Trained in Fine Arts for one, and a school of visual communication to the other, they cultivate a shared taste for music and concert organizations. (Gaspard began organizing concerts under that name in June 2002).
It was not until the spring of 2005 they discover all the screen through a group of friends in a small workshop in Bondy (Paris suburbs).
Will follow a few years of experimentation, errors, testing and discovery.
They have been specializing in this technique and have created more than one hundred concert posters, album covers, designs t-shirts and even began to publish books of artists (O'Chaos, LL Cool Jo, Zhi Zang ...).

In meetings, they were invited to show their work in many cities of France and Europe (Berlin, Rome, Brussels, Herleen, Tilburg, Hamburg, Paris, Lyon, Toulouse ...).
And since July 2009, they opened their own printing workshop in Paris in the 11 district, at 80 rue du Chemin Vert... permanence is regularly carried on Saturdays from 15h to 19h ... you're very welcome. 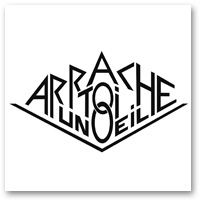